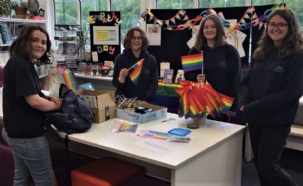 To mark Pride Month this June, some of our students have been getting together to set up a library display to raise LGBT+ awareness in school.

To mark Pride Month this June, some of our students have been getting together to set up a library display to raise LGBT+ awareness in school. Year 9 Rain’s original idea was to hold a bake sale to generate funds for a new resource section in the library, but with Covid restrictions this was going to be impossible to do safely. As an alternative, Rain and friends displayed some of the LGBT+ books we already have and brought in rainbow flags and button badges for sale. At the same time, Rain’s mum organised a cakes-for-donations event outside school and, with the support of local bakery Bele Brownies of New Mills, raised over £100 towards the total.

With the anniversary next week of the Stonewall Uprising, which led to the foundation of the lesbian, gay, bisexual and transgender rights charity in the United Kingdom, Year 9s and 10s are organising a Pride Party to take over the library this Friday lunchtime. Plans are still ongoing but it looks like being a thrilling end to what has been a great month in school. As Kirsty Wark probably didn’t really say, more on that story later.

Rain’s efforts have attracted a lot of attention in school and the plan to raise awareness has certainly paid off. The final amount collected will be announced once the books are all back on the shelves and the shopping list for Rain’s new LGBT+ section is taking shape. Staff and students have been incredibly supportive and it’s good to see what an inclusive bunch we all are at HVC.