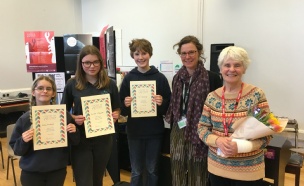 A write up about this year's national Poetry By Heart competition

HVC’s participation in this year’s national Poetry by Heart competition reached its exciting climax last week with a visit by not one but two published writers. Seventeen students from Year 8, each chosen from their class heats, took to the stage to recite poems they had chosen to learn off by heart in front of their entire year-group and a panel of judges. We were very honoured to have novelist, poet, screenwriter and double Carnegie medal-winner, Berlie Doherty, as well as children’s author Alan Brown, as special guests for the event.

The event was the culmination of a Year 8 project in which every student chose and memorised a poem from a wide selection offered by the Poetry by Heart organisers, which they then recited for their peers. The most fluent and expressive performers in each class were put through to the school final, where the judges were asked to choose their top three based on voice, understanding, presentation and accuracy. Finalists’ poems ranged from Miss Lucy Had a Baby (Anonymous) to Shakespeare’s Sonnet 18 and Emily Brontë’s Fall Leaves, Fall. Two of the finalists were surprised and not a little nervous to find themselves reciting poems by Berlie herself. Three performers who stood out to the judges were Molly Bradwell with Answer to a Child’s Question by Coleridge, Scarlett Richards with Kipling’s If and Tom Sambridge with his brilliant rendition of Lewis Carroll’s Jabberwocky, which won him the HVC title.

After the event, Molly said that she had thoroughly enjoyed choosing and learning her poem, and performing in front of Year 8. “Although I was nervous at first, I felt happy when I got started. I chose my poem because I liked the title.” Had she been inspired to try writing some poetry of her own? “Yes, I’ll give it a go!”

Tom said “I was sceptical about the project at first, but I liked this poem, which I didn’t really know before the competition”. He chose his second poem, Crawford’s The Stretcher Bearer, because he wanted to do something written by a First World War poet. “But I liked Jabberwocky best!”

Tom’s two poems have now been recorded and submitted online for the national phase of the competition, the winners of which will take part in a live national finals event in London later this month. At that event, hosted by The Poetry Society, a judging panel comprising top poets will choose and crown this year’s three national champions. Fingers crossed Tom is among them!

Poetry by Heart is a nationwide competition open each year to schoolchildren and young people from Key Stages 2,3,4 and 5, as well as to school staff. The website is a goldmine for poetry fans, setting out a wide selection of poems of many ages and genres, and well worth a visit. https://www.poetrybyheart.org.uk/